by Hannah Wilson, the French Californian

I first came to Paris as a student. I lived in an adorable 7th-floor studio apartment in the 15th arrondissement and had the hardest yet most exciting five months of my life thus far. That whirlwind adventure was exciting for me; taking the metro felt exotic and having such a wealth of culture at my fingertips (and the freedom to take advantage of them) was so much fun. Since then, I’ve finished uni, gotten married and moved back to France, this time settling down in Versailles. One of the first things I discovered was that living full-time in a foreign country is completely different than having a five-month long adventure in it.

I’ve wandered around the streets, museums and shops of Paris innumerable times – I practically know the city like the back of my hand. After getting to know a city like that, you do feel more confident and knowledgeable but it also means that perhaps you’ve explored it too much. I’ve grown tired of many, many places here – most significantly the Champs Elysées and the areas directly next to the Eiffel Tower and in front of Sacré-Coeur where all the pickpockets and con artists prey on naive tourists. I avoid those areas like the plague – in fact, I could write an entire article on where NOT to go in Paris. However, after all this time, and despite the bad bits, there’s still a handful of places that continue to bring me joy, places that still live up to that romantic, beautiful Parisian fantasy that can so easily get lost in the sprawling metropolis that is Paris.

So without further ado, here are my five favorite places in and around Paris.

Having lived in Versailles for almost 2 years, I have to put this one first. I really should call myself a Versaillaise rather than a Parisian. The Château de Versailles is amazing—whenever I walk to the train station or the single Starbucks in town, I pass by the gleaming golden gates. The main Château does what its supposed to: make you feel overwhelmed by the power and riches of France’s former monarchy, but I’m more interested in the people behind the architecture. Marie Antoinette is a fascinating person and her entire estate, including the small château Petit Trianon, her wild, unstructured garden, and her play-farm are all evidence of her motivations, personality and desires. She was so eager to escape the rigidity of the French court system that she built an entire alternate reality around herself. In fact, I was so interested in her life that I read the biography by Stefan Zweig, which I highly recommend. 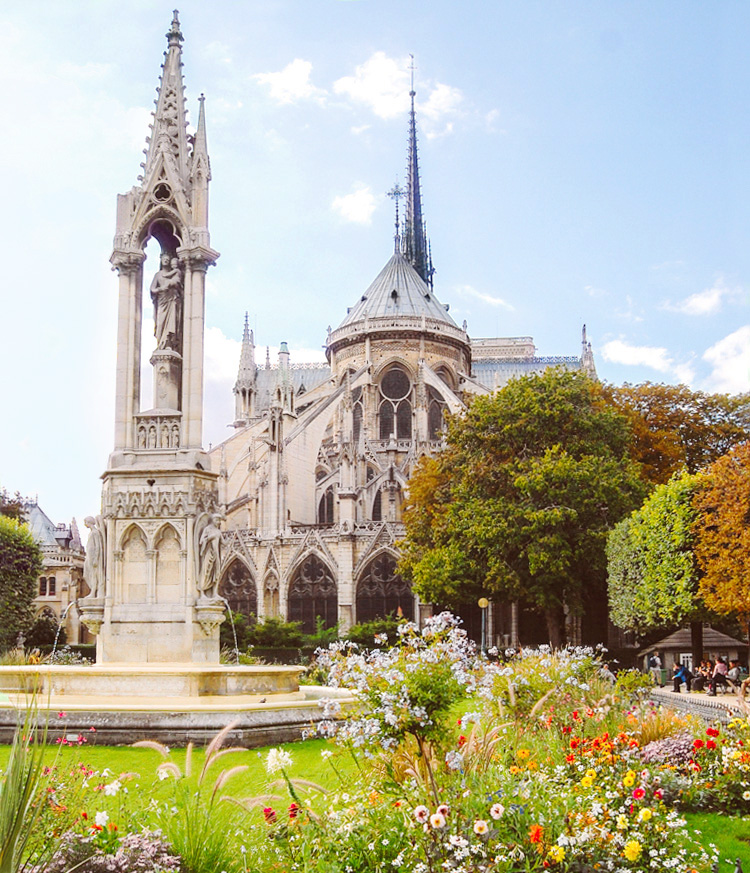 The Back and Side View of Notre Dame

It may seem like an overkill, but I do indeed have a preferred angle at which to view the Notre Dame cathedral. The front is impressive and imposing but the back and sides are where the magic happens for me. It’s here where the Gothic architecture really shines with its flying buttresses and endless pointy shapes. The little garden behind the cathedral is so charming, but one of my favorite things to do is grab some Berthillon ice cream from the smaller river island – Île-Saint-Louis – meander over the Pont de la Tournelle, then descend the stairs to the riverbank. It’s just magical.

Breakfast in America and Thanksgiving

Being a hardcore Reese’s and Rootbeer lover, I would be a sad person without my two favorite sources of American goods. Breakfast in America has a couple branches and always serves up a perfect American-style breakfast in a 1950s diner setting. Thanksgiving is a dry-goods store full of American classics, some of which I thought had been lost in cultural obscurity. They have cans of Campbell’s soup that look exactly like Andy Warhol, Shake n’ Bake Chicken mix, Betty Crocker cake mix, instant Jello mix, Easy Cheese, cream soda, and even Vanilla Coke. Honestly though, the only things I ever buy here are Reese’s and Root Beer, although it feels good just to be amongst all the other crazy American goods even if they are horribly unhealthy. 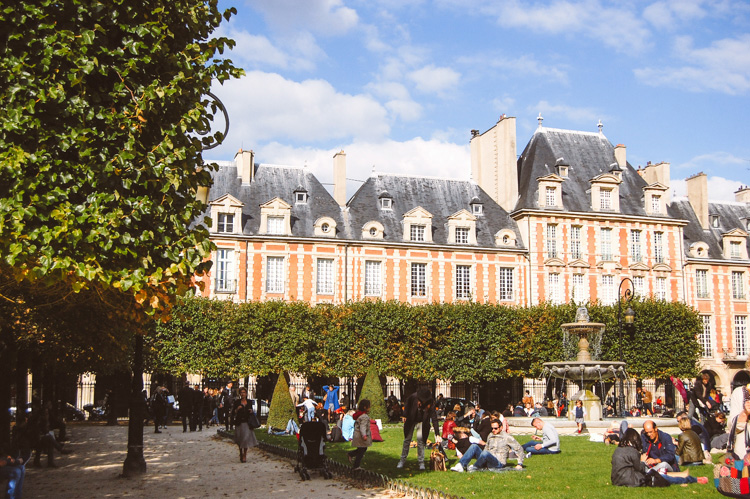 There are so many gorgeous parks in Paris (Monceau, Buttes Chaumont, Luxembourg, Tuileries, and Palais Royal, just to name a few), but the one I visit the most is the Place des Vosges. Imagine this: a warm summer’s day, a splashing fountain, light breeze blowing, a picnic in the grass, and a street band playing lively and ancient-sounding Jewish Folk music (the neighborhood is also the Jewish quarter after all). Whenever I venture into Paris, I most often end up in this neighborhood, the 3rd Arrondissement… It’s such a great area, with unique cafés and restaurants, fun museums, and some of the best shopping in all of Paris. Here are some quick favorites in the area: Café Pinson has amazing vegetarian food, Merci is an extremely cool home goods shop to visit, and Musée Carnavalet is always free and has a gorgeous reconstruction of an Art Nouveau boutique, my favorite piece in the museum.

This is about an hour train ride outside of Paris, but i’m including it in this list because it makes for an incredible day trip. I’ve been here in early spring, mid-spring and early autumn and I can confirm that no matter the season, it is gorgeous. The flowers are completely different depending on which season you visit. The first time I went, the tulips were in full force, so vibrant they made my eyes water. The second time I visited was in September, so the flowerbeds were wild and overgrown, with dahlias as big as my head. The lily pond – the very one that Monet painted – is always peaceful, but I seem to keep missing the Wisteria blooms on the Japanese bridge; they must have a very narrow blooming period.

It was difficult to narrow my favorite places down to just five, so I’m giving some honorable mentions now! Shakespeare & Company English bookstore, in the off-season when it’s not super-crowded with a line out the door, and they just opened a café next door! Pavillon des Canaux also has to get a mention; it is the most adorable café I’ve ever seen, like a real-life dollhouse. Finally, the Père Lachaise Cemetary in all it’s melancholy beauty is so fun to explore.

Thank you so much for reading! You can find more from me at my website FrenchCalifornian.com and I hope to see you over there.

Off the Beaten Path in Paris: The Grand Mosque

Pet Cafés in Paris
Hello travelers! Do you love to wander with your camera? Me too. Subscribe for great travel experiences and places to photograph.