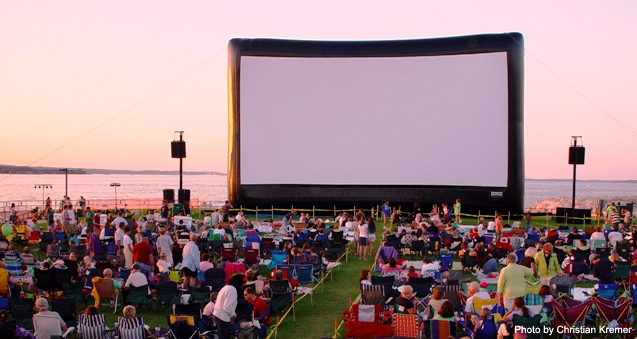 If you live in Los Angeles, you more than likely enjoy the long summer days and warm summer nights. Most would agree that outdoor film showings are a perfect opportunity for hanging outdoors as long as you can, enjoying the great weather and good friends.

While daylight savings time will sadly end soon, you still have plenty of opportunities to invite some folks out and have a fun outdoor movie night over the next few weeks. September is really the last hurrah for most venues until next year. Some showings I’ve listed below are free, some have a paid admission. But in every case I rounded up deals for the cheapest tickets I could find, and it’s always cheaper to buy online. Act fast because these tickets are getting scooped up.

6000 Santa Monica Blvd, Hollywood, 90038
Saturday, September 14: Alien
Saturday, September 21: Boogie Nights
Gates Open at 6:30pm, Film Begins at 8pm. Tickets are $12.
Probably the most popular of outdoor film showings in Los Angeles because of the unique venue; palm trees and tombstones. Get your tickets online now because they tend to sell out. Arrive early and find free parking in nearby residential streets, bring a blanket and enjoy the show!
Get Tickets Now

1000 San Julian St, Los Angeles 90015
Saturday, September 14: Forrest Gump
Film Begins at 7:30pm. Tickets are $3
Load the family into the car and head for the drive-in! It’s located on top of a parking garage in the middle of Downtown LA.  This showing is the premiere of their Fall Film Series; a very entertaining film and one which earned six Oscars. Full snack bar with BBQ, popcorn and drinks.
Get Tickets Now

Movies in the Park by Grand Park LA

Grand Park, 200 North Grand Ave, Los Angeles 90012
Saturday, September 14: E.T.
Gates open at 5:30pm, Film Begins at 8pm. Admission is FREE.
Food trucks will be there, pets are allowed, bring a blanket and park yourselves on the lawn!

Santa Anita Park, 283 W Huntington Drive Arcadia, 91007
Saturday, September 14: Pirates of the Caribbean: The Curse of the Black Pearl
Gates Open at 5:30pm, Film Begins at 8:30pm. Tickets are $3.50
A variety of food trucks are on hand to make sure you have a tasty dinner, with live music from the local pop/rock trio Bravesoul.
Get Tickets Now

Alcove Cafe Dinner and a Movie Under the Stars

1929 Hillhurst Ave, Los Angeles, 90027
Monday, September 16: Clueless
Alcove is a charming Cafe and Bakery with a 17 ft screen on the front of their building; next week is their last event for their summer “Dinner and a Movie” nights. No admission fee, no tickets, no reservations. Just show up. Dinner specials and craft cocktails are on hand at their sprawling garden patio under the stars.
More Info

Glendale Central Park, 201 E. Colorado St Glendale, 91205
Saturday, September 28: The Princess Bride
Gates Open at 5pm, Live Music at 6:30, Film Begins at 8:30pm. Tickets are $7.50
Live music from the band Great Eastern and dinner from some of the most popular food trucks in town such as India Jones, Downtown Dogs, Slumin’ Gourmet and more. The Princess Bride could be described as a parody of swashbuckling fantasy tales, and a tale of true love and adventure – I definitely know some people who won’t miss this one.
Get Tickets Now

The Iconic Griffith Observatory
Hello travelers! Do you love to wander with your camera? Me too. Subscribe for great travel experiences and places to photograph.