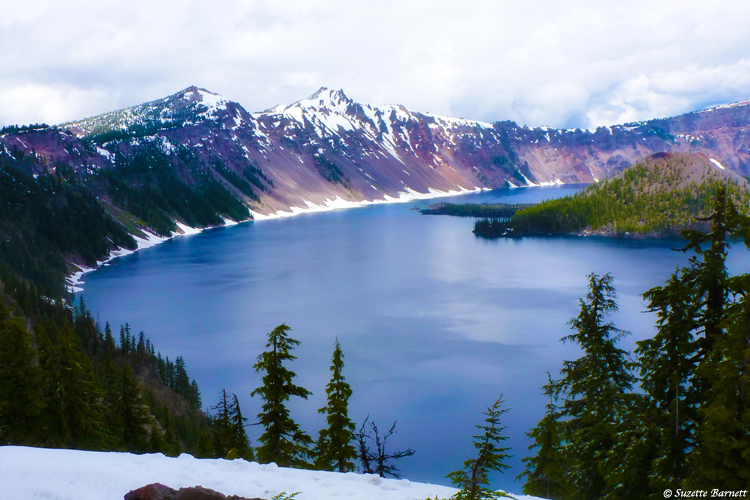 On my road trip from Los Angeles to Portland Oregon, Crater Lake wasn’t exactly on the way but I heard it was not to be missed. Never were truer words stated.

Knowing nothing about Crater Lake before I got there, I truly didn’t know what to expect. Traveling up 2000 feet on snowy mountains in the middle of July is the last thing I expected. I was like a giddy 6 year old seeing the snow the first time. ‘Look, there’s more! And over there too! It’s snow, it’s snow!’ 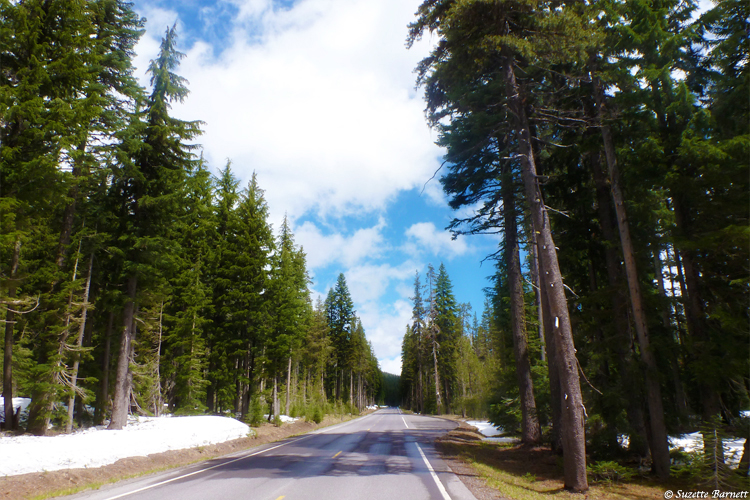 Before I knew it there were huge wide open fields of two feet of snow! Perfect for snowballs, and I didn’t hesitate for a second (that’s my snowball coming straight for you)! 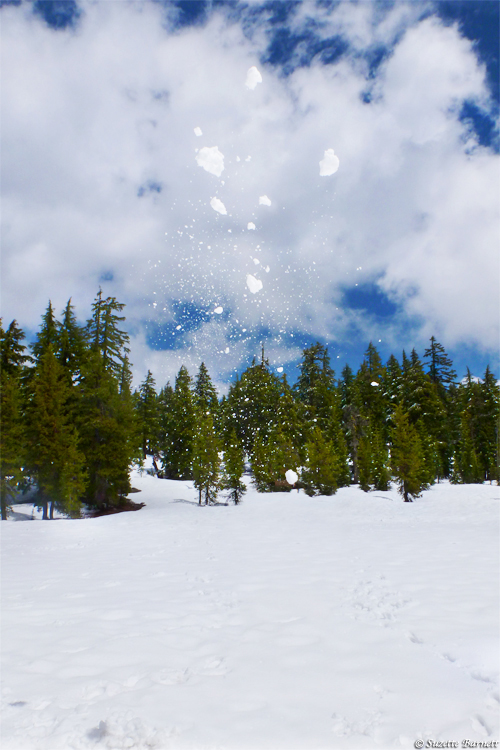 Crater Lake has been inspiring people for thousands of years (it’s over 7700 years old). The views from up there are immeasurably beautiful and the vibrant blue water is one of a kind. I’m told that we got to see it under some of the best conditions possible. Visibility in Crater Lake has been measured at 43.3 meters, which puts it among waters with the highest visibility in the world. Swimming in the lake is allowed but the only access is a bit intense via a steep, mile-long trail and the water is c-c-c-o-l-d. 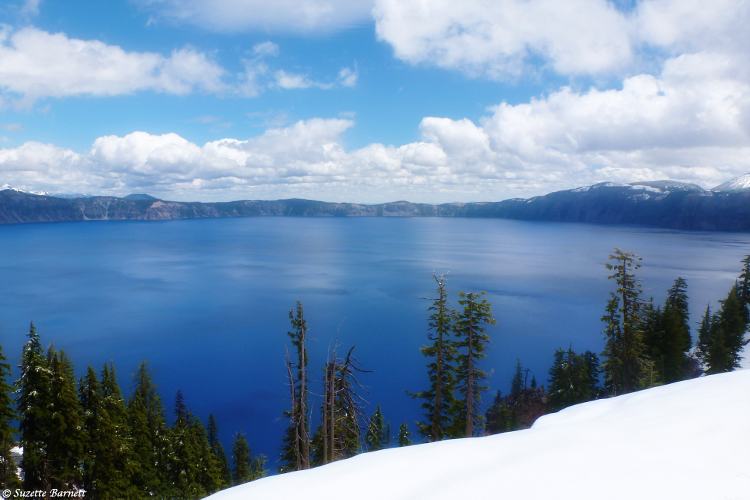 The Klamath tribe of Native Americans have long regarded Crater Lake as sacred. In their mythological legend, there was a battle between the sky god Skell and the god of the underworld, Llao. The story goes that Mount Mazama was destroyed in the battle and Crater Lake was created.  The Klamath people would set out on quests which sometimes involved climbing the lake walls and other dangers, and those who had success in their quests were regarded as having higher spiritual powers.

As we hit the road back down the mountain to continue our journey, we caught some breathtaking views. If Im not mistaken, that is Mt Thielson off in the distance. Gorgeous. 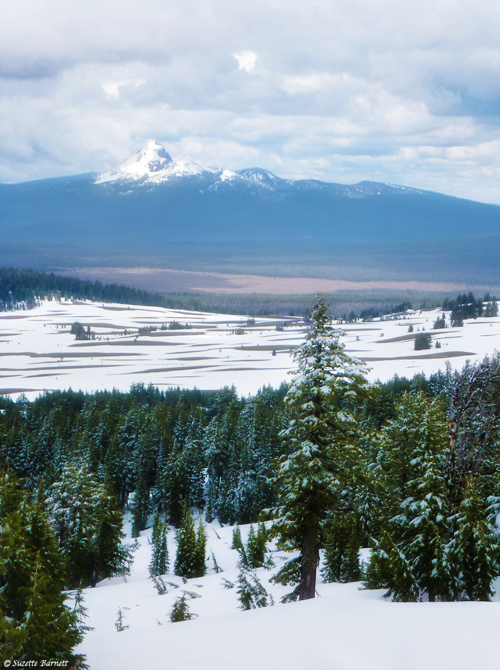 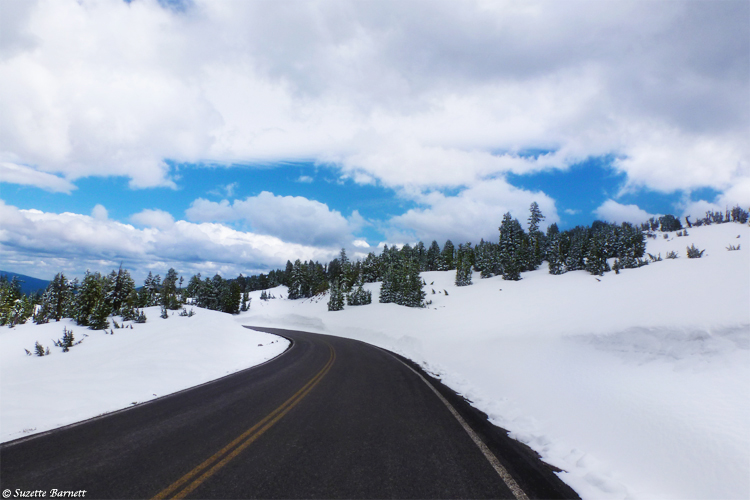 If you plan a visit this area, make sure that after Crater Lake you travel back to the Interstate on the nearby Rogue-Umpqua Scenic Byway (Highway 138) because it is one of the prettiest drives in the country. It follows the Umpqua River and has over a dozen turnouts for hikes, trails and waterfalls. Toketee Falls and Susan Creek Falls (photos inset) are my favorites. 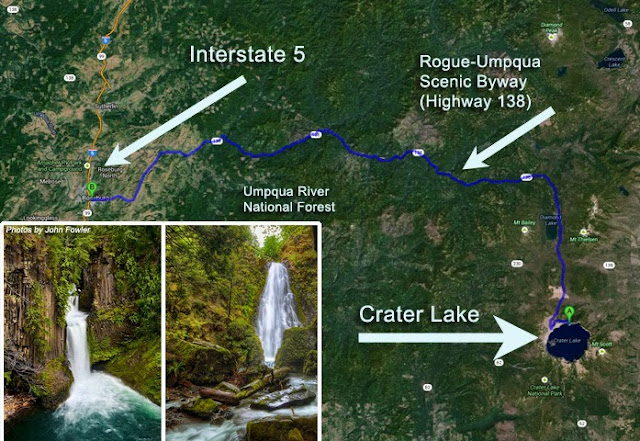 Next Stop: Baby Cheetahs at the Wildlife Safari in Winston,  Oregon! Come with me!

Descanso Gardens in Springtime
Hello travelers! Do you love to wander with your camera? Me too. Subscribe for great travel experiences and places to photograph.